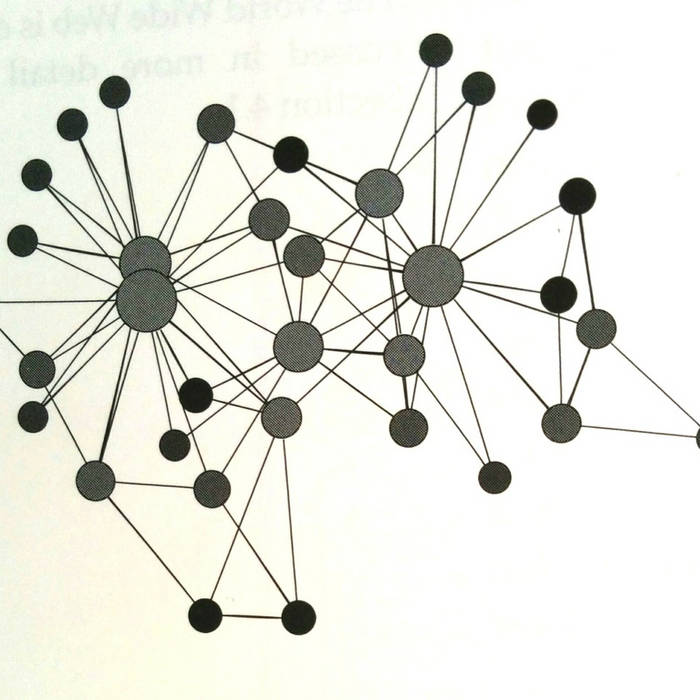 "I’ve been interested in networks and their musical applications for quite some time now, so when confronted with writing for Ignition Duo, I decided to take a shot at a bit of network sonification.

Leafing through a book on networks, I was attracted to the following image:

I had my muse: the social dynamics of a karate club from the 1970’s.

Eyeballing the diagram, it was clear that there were a couple of main karate-ers who were especially well connected. (Such people are generally known as "hubs" in the Network literature.) You know which ones I mean: if the diagram is an owl's face – which, I mean, it seriously looks like an owl – then these people are the eyes.

In assigning pitch material, I decided to make these two social butterflies the fundamentals of the E and Bb harmonic series, and to make their close associates the overtones. The music would bounce around from one member to another by traveling along lines of friendship. One guitar would be specially tuned to play pitches from one series, the other from the other series, so the music would pass back and forth between the two guitars, as it passed back and forth between the two main sub-groups. Members whose allegiance was somewhat ambiguous were assigned high pitches that alternated between being tuned as an E overtone and a Bb overtone.

Having thus taken care of the pitch material, I played around with a few algorithms for the rhythms, and eventually arrived at the final score.

Funnily enough, shortly before the piece was performed, I was chatting with my sister-in-law, and telling her about the project. She was getting a PhD in Public Health at the time, and networks come into play frequently in her work (such as in studying the spread of disease or the
dissemination of health information). It turned out she had the exact same network book that I did (though I think she's actually read it), so she looked up the page with my chosen network, and to my surprise she knew the network by name ("That's the karate club network!"). It turns out to be one of the most studied networks in the history of the field (of networks). This seemed like a hilarious coincidence, though now that I think about it, I'm not sure what else I should have expected from the introductory chapter of an introductory book about networks.

What was most funny, however, was that it turned out that shortly after the data was collected, Hub A and Hub B had a falling out and the club was "chopped" into two rival karate clubs. Thus, I had inadvertently constructed my piece in perfect counterpart to the real life situation the network portrayed! It was a proud moment."

from ABLAZE AMIDST THE HORNS, released January 30, 2016
Composed by Marc Evans

Marc Evans is currently working towards his PhD in music composition at UC Santa Barbara, where he is the recipient of a Chancellor's fellowship and studies composition with Profs. Clarence Barlow and Joel Feigin. A musician and composer since a young age, he chose to pursue his undergraduate degree at Stanford University, where he studied with Jarosław Kapuściński. Following up on his strong interest in computers and interactivity, he then continued on at Stanford with a master's degree in Music, Science and Technology. He is the winner of the 2015 Bowdoin International Music Festival Composition Contest, as well as other smaller awards.

Evans is also a pianist, and has been fortunate to study with Thomas Schultz at Stanford and Charles Asche at UC Santa Barbara. He would like to extend profound gratitude to all of the above-mentioned teachers, who have contributed immeasurably to his musical thought and understanding.